By uuchurchbrunswick on June 2 in Community Events

UUCB Concerts for a Cause:  JOHN GORKA
Unitarian Universalist Church of Brunswick

UUCB Concerts for a Cause is very proud to present the extraordinary singer-songwriter, John Gorka, on June 2nd at 7:30 at the Unitarian Universalist Church of Brunswick.

John Gorka, a contemporary American folk musician from Minnesota, is widely heralded for the sophisticated intelligence and provocative originality of his songs.  Rolling Stone called him “the preeminent singer/ songwriter of the New Folk movement” while the New York Times wrote, “Listening to John Gorka, one can get goosebumps all over. There are many reasons: fresh lyrics, a stunning emotional baritone, and his twisted humor.”

Gorka was inspired to become a folk musician in the early ’80s, while working (and living) in a coffeehouse frequented by artists who were at the heart of the ’60s folk revival. Godfrey Daniels, a club in Bethlehem, Penn., became Gorka’s folk classroom, as artists such as Tom Paxton and Stan Rogers crossed its stage, performing intimate acoustic music.

He generally mixes in a few songs by other songwriters, and maybe a cover or two of a familiar song, but it is his original songs that really stand out. He crafts his songs extremely well, covering a wide variety of subjects, based on people he has met and things he has seen. Some are fun and humorous, others have social commentary or tell emotional tales. He moves easily through many  genres, sometimes even mixing them.  He’s a great writer who knows how to put a tune to his tales. On stage, he’s very engaging, often interacting with the audience. On top of that he is a very fine guitarist, and his fingerpicking adds a great deal to the songs. 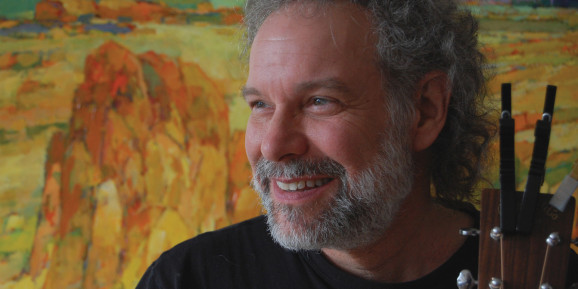 Over the years he has built a very impressive body of songs that makes this a must-see show. In addition to his 11 critically acclaimed albums, John released a collector’s edition box featuring a hi-definition DVD and companion CD called ”The Gypsy Life.” Windham Hill also released a collection of John’s greatest hits called “Pure John Gorka.”

Many well-known artists have recorded and/or performed John Gorka songs, including Mary Chapin Carpenter, Nanci Griffith, Mary Black and Maura O’Connell. John has graced the stage of Austin City Limits, Mountain Stage, etown and has appeared on CNN. His song “Where No Monuments Stand” is featured in the documentary Every War Has Two Losers, about activist and Oregon Poet Laureate William Stafford (1914-1993).

There are few contemporary songwriters that come anywhere close to the talent of John Gorka. His songs have a way of working on you long after you thought you had it all figured out. I will listen to a song that I know all the words to and can sing along with. but then one day sitting at a traffic light I realize that there was a whole other layer of meaning that I had missed.
— Ben Wakeman, songwriter and host of Take Me To The Bridge podcast