By uuchurchbrunswick on April 7 in Community Events 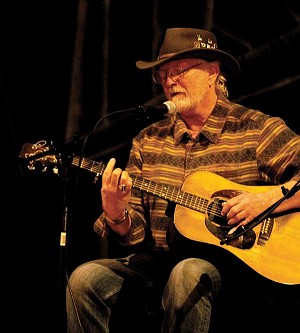 One of the best-known and beloved singer-songwriters from the American folk music scene is making his way to Brunswick. Bill Staines will be the guest performer for the Concerts for a Cause series at the UU Church of Brunswick on Saturday, April 7, 2018 at 7:30pm.

Bill Staines has spent five decades on the road singing his songs and entertaining audiences, starting with the Boston folk scene in the early 1960s. With his heartfelt songs, his warm, smooth baritone, his prowess on guitar, his charm and gentle humor, he is one of the most popular singers on the folk music circuit today.

Staines, whose music is described as “a slice of Americana,” has appeared on Public Radio’s Prairie Home Companion and Mountain Stage and puts on nearly 200 shows a year around the country. In what has to be the ultimate tribute for a songwriter, many of his songs have been recorded by everybody from Peter, Paul and Mary and Nanci Griffith to Glenn Yarbrough and the Irish folk duo, Tommy Makem and Liam Clancy.

Staines has recorded 26 solo albums, including two children’s recordings. More than 80 of his tunes have been published in songbooks. Staines has also made his mark yodeling.  He won the National Yodeling Championship in Kerrville, Texas, in 1975 and has become a perennial instructor of yodeling workshops. If that’s not enough, Bill is left-handed and plays a right-handed guitar upside-down, with the bass strings on the bottom!

Staines writes songs with instantly memorable sing-along choruses.  His now classic, melodically charming, enviably clear, lyrical songs, like “The Roseville Fair,” “A Place in the Choir” and “River,” are graced with home-spun wisdom on life, love and memories, and are decorated with beautiful, melodic threads and flowing, pristine lyrics.

On stage, Staines is an intimate, compelling performer, mixing in traditional tunes with his own contemporary folk ballads. His humorous tales of life on the road and observations of everyday people provide an entertaining blend of story and song.

Tickets are $15 in advance or $18 at the door. Available at the church office (729-8515), at Gulf of Maine Books, or ONLINE at https://bstaines.brownpapertickets.com