By Michael Gil Gilroy on November 4 in Art / Culture

For years, Belfast, Maine-based Eastern Illustrating and Publishing Company sent traveling photographer-salesmen on the roads all over New England and beyond with cameras, catalogues, and order books, seeking buyers and markets for their unique “real photo” postcards.

The Northeast by Eastern combines Eastern Illustrating and Publishing Company’s comprehensive collection of early 20th century photographs with archival film footage, interviews, oral histories, a musical soundtrack featuring period music, as well as an original score by Sumner McKane. Combined, these stories and images illustrate an era unlike any other in American history. Interviews and oral histories not only detail the history of the Eastern Illustrating and Publishing Co., and the postcard craze of the early 1900s; but also divulge stories from a quieter, simpler, yet stirring and enterprising time period. The audience hears first-hand accounts of smuggling during prohibition, of river drivers brawling for fun, of growing up without worry and without constant adult supervision, and of slop buckets spilling on tourists’ pies. These accounts are woven together amidst an exceptional backdrop of archived films and Eastern Illustrating’s work. 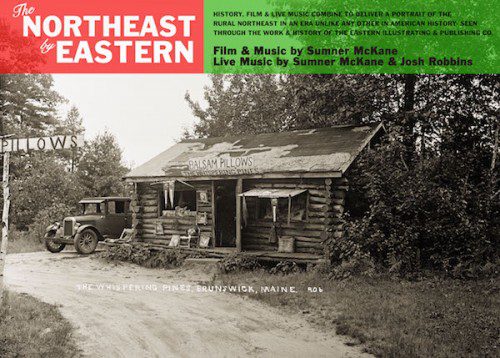 Sumner McKane is a filmmaker, composer and musician based in Wiscasset, Maine. He records instrumental music, film scores, and music for media. He produces historical documentaries along with companion live presentations to his films. In a few short years, Sumner has built a reputation for innovative historical storytelling using multimedia, combining various mediums to tell a historical story in a live setting. Sumner studied photography in Missoula, Montana at the Rocky Mountain School of Photography and the University of Montana. He graduated from the University of Southern Maine with high honors in history. His music is often featured on NPR’s Echoes program, and he is a recent Maine Arts Commission Performing Arts and Media Fellow award recipient. The Northeast By Eastern his third historical documentary film project, following The Maine Frontier (2014) and In The Blood (2010). Sumner is accompanied by Josh Robbins on bass guitar. Josh is a multi-instrumentalist and songwriter and has recorded and performed with Sumner in arts venues, theaters, historical societies, schools and other venues throughout New England for over a decade.