With a voice of grit and gravel, roots musician Samuel James sings with an authenticity lost in time. A modern guitar master, James’ skill has a depth and range that seems impossible for a man with only two hands.

An award-winning songwriter, one of the world’s most innovative guitar players, and a Moth-featured storyteller, James brings all of this to his amazing stage show. A live performance by Samuel James is part theratre concert, part stomping-on-the-porch dance party and part stand-up comedy.

He was born the last in a long line of performers including dancers, story tellers, choir singers, jazz pianists, and porch-stomping guitar thumpers dating back to the 1800s.

Samuel James’ songwriting has been compared to Leonard Cohen’s and his virtuosity on the guitar to that of Jimi Hendrix. 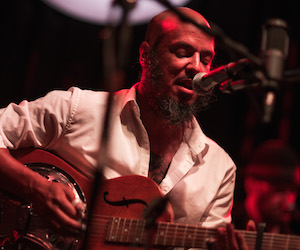 His critically acclaimed trilogy of albums, Songs Famed for Sorrow and Joy (2008) For Rosa, Maeve and Noreen (2009) And for the Dark Road Ahead (2012) for Toronto’s Northern Blues label has gained Samuel praise not only for carrying on great traditions, but for being a true innovator.

His latest album Already Home Recordings Vol. 1 has been called a “rich narrative… fascinating… vital to our cultural dialogue.”