Celebrated as an “…eloquent, poetic voice in contemporary music…” [American Record Guide], Melinda Wagner’s esteemed catalog of works embodies music of exceptional beauty, power, and intelligence. Wagner received widespread attention when her colorful Concerto for Flute, Strings and Percussion earned her the Pulitzer Prize in 1999. Since then, major works have included Concerto for Trombone, for Joseph Alessi and the New York Philharmonic, a piano concerto, Extremity of Sky, commissioned by the Chicago Symphony for Emanuel Ax, and Little Moonhead, composed for the Orpheus Chamber Orchestra, as part of its popular “New Brandenburgs” project. 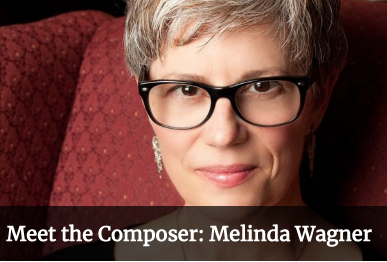 Noted for its “…prismatic colors and…lithe sense of mystery…” [Washington Post], Extremity of Sky has been performed by Emanuel Ax with the National Symphony (on tour), the Toronto and Kansas City Symphonies, and the Staatskapelle Berlin.

Championed early on by Daniel Barenboim, Wagner has received three commissions from the Chicago Symphony; the most recent of these, Proceed, Moon, is to be premiered by the CSO under the baton of Susanna Mälkki in 2017. Other recent performances have come from the American Composers Orchestra, the United States Marine Band, BMOP, the American Brass Quintet, the Empyrean Ensemble, and the Philadelphia Chamber Music Society.

A passionate and inspiring teacher, Melinda Wagner has given master classes at many fine institutions across the United States, including Harvard, Yale, Eastman, Juilliard, and UC Davis. She has held faculty positions at Brandeis University and Smith College, and has served as a mentor at the Atlantic Center for the Arts, the Wellesley Composers Conference, and Yellow Barn. Ms. Wagner currently serves on the faculty of the Juilliard School of Music.