By Patti Spencer-Yost on March 8 in Live Music

“Maine’s 200th: Music of Early Maine” is the DaPonte String Quartet’s tribute to Maine’s Bicentennial. We are joined by guest artist Eric LaPerna, percussion for a program that highlights significant events along Maine’s pre-statehood timeline (from the 16th to the early 19th centuries), with selected music to share some of the cultural influences.

When we learned about the notated songs of Membertou (c. early 1500s-1611), a major shaman-chief of the Mi’kmaq nation, the idea for this program began to percolate. What music might there have been, as so many different people explored, fished, and colonized Maine’s rocky coast and European influences began to permeate the land?  But we have only a scant trace of documented music from northeastern North America in this early period, making the written record of Membertou’s songs, and one young colonial bachelor’s dance book found in Topsham, so valuable. 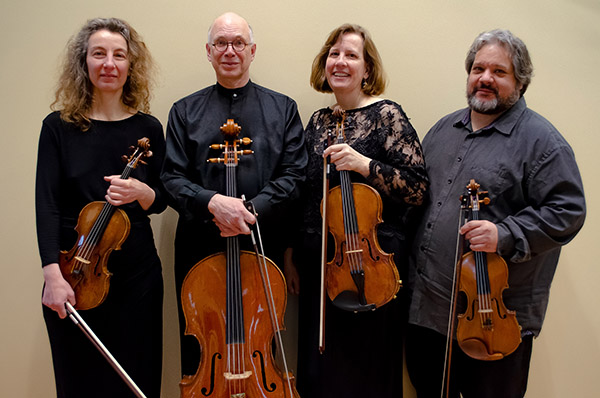 We know that music played a vital role in indigenous communities, that European sailors sang chanteys to accompany their work, and that all communities blessed their watercraft with traditional music. Noblemen and naval captains would have heard the latest music in Europe. French Jesuit missionaries brought their musical liturgy and passed it on to new generations of Catholics. Publications of the latest English dance tunes sold like hotcakes when they arrived in Boston in the 18th century. But aside from such generalities, we can only speculate about what music might have been in the air, and crossing the seas, “earworms” perhaps, of the people who lived in what we now call Maine.

The chronological arc of this program of early Maine music traces a long period of lasting European colonization in the region. Over time English military forces in combination with colonial and imperial policies as well as deadly pathogens that devastated native villages led to Euro-American dominance in the region. In the face of this onslaught, Native American persistence in Maine, and the trans-national northeast more broadly, stands as a witness to a remarkable human accomplishment built upon the adaptive skills and knowledge that are the foundation of indigenous cultures and societies.