The MAINE MASTERS series of ongoing artist documentaries is a New England Emmy Award-nominated series of portraits of some of Maine’s most distinguished artists sponsored by the Union of Maine Visual Artists. Since 2000, the series has received national and international attention through screenings at festivals, museums, libraries, and schools in the US and abroad. This artist grouping features amongst the four best films: Carlo Pittore who founded the Union of Maine Visual Artists was featured in the Maine Short Film Festival; Lois Dodd is amongst the best loved and admired artists in New York and Maine; Stephen Pace’s film was nominated for the New England Emmy; and David Driskell’s film won the best film broadcast on MPBN’s Community Films in 2015. These portraits reveal the inner thoughts of these artists: what inspires them; what they love about being an artist in Maine; and what they leave behind.

THE RAW ESSENCE OF CARLO PITTORE is a portrait of this vulnerable artist who led a generation of younger artists in co-founding the Union of Maine Visual Artists and changed the way we define beauty in figurative art.

LOIS DODD: MAINE MASTER
Lois Dodd is recognized for her intimate, poetic, painterly approach to landscape, figure and floral motifs. In 1952 she co-founded the Tanager Gallery in NYC that was instrumental in leading the NY abstract expressionist movement exhibiting such artists as Willem deKooning and Franz Kline. Her works can be found in the Portland Museum of Art, the Farnsworth Museum, and the Whitney Museum among others.

STEPHEN PACE: MAINE MASTER
This film follows Stonington painter Stephen Pace from his early days in Paris meeting Picasso and Gertrude Stein to the heady days in New York with Pollack, deKooning and Kline. But his last days in Maine were his finest – relishing the elements of his surroundings in paint – from a box of blueberries and sunlit porch to lobstermen loading bait.

DAVID DRISKELL: IN SEARCH OF THE CREATIVE TRUTH is a story about one of today’s most important artists and leading authorities on African American art. This film captures Driskell making collages inspired by mentor Romare Bearden and explores the give and take of his creative relationship with master printmaker, Curlee Holton. It all results in powerful works that pull from abstract expressionism, African masks, Coptic art, modernism, cubism – the history of all art in the works of this wise and gentle man. 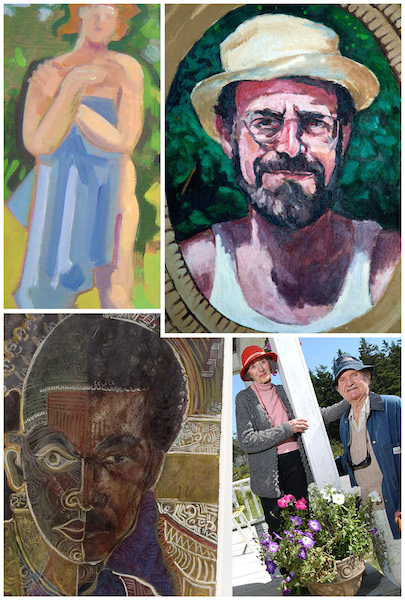