By Michael Gil Gilroy on January 21 in

Set in the year 2030, the rock opera begins with the story’s hero, Paolo, being chosen as the first human to travel to Mars to set the stage for a human colony that will follow. But there’s a catch: it will be a one-way trip. In taking on this mission Paolo must leave behind forever everything he holds dear—including his loving wife Cassandra—for he will never be able to return to Earth.

But trouble is brewing. Shortly after he lands on Mars, catastrophic events from global warming and nuclear terrorism on earth cause communication links to go down, and Paolo is left alone and completely cut off from human contact. Meanwhile, just as chaos on Earth closes the window on future missions, the space agency recruits Cassandra to fly to Mars. As Cassandra lifts off from Earth, she does not know if Paolo is still alive, and Paolo does not know that she is on her way to join him. 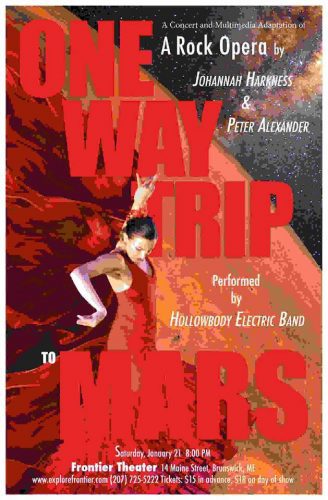 During the ensuing, interminable months of loneliness Paolo sinks deeper into despair, while Cassandra comes into her own power. Finally, using only manual controls, Cassandra crash lands on Mars, where Paolo finds her. Does Cassandra survive the crash? The opera ends with this and other questions left to your imagination.

Peter Alexander and Johannah Harkness of Bath are award-winning songwriters and the cornerstones of Hollowbody Electric Band. “We are really excited to perform ‘One Way Trip to Mars’ in the intimate space of the Frontier Theater,” said Alexander. “We’ve adapted the production for the venue, telling the story through sound, light, and video. We are especially grateful to the many amazing performers and technical experts who have joined with us to make it a thoroughly engaging piece of theater.” You can learn more about Hollowbody Electric Band at www.hollowbody.us

Peter and the Farm
The Eagle Huntress