By Carol Marquis on May 19 in Art / Culture

In preparation for their 2017 summer season at the Pickard Theatre, Maine State Music Theatre will host its final Film Friday May 19 at Brunswick’s Curtis Memorial Library. Featuring the fourth show of it’s main stage season, the 1992 version of Newsies will be screened at 6 PM and take place in the Morrell Meeting Room.

Disney’s 1992 movie, Newsies, with music by Alan Menken and J.A.C. Redford, is loosely based on the New York City newsboys’ strike in 1899. It stars Christian Bale, Bill Pullman, Ann-Margret, and Robert Duvall, and was later made into the 2012 Tony-award winning stage version with music by Menken, lyrics by Jack Feldman, and book by Harvey Fierstein. Also a major dance show, the score boasts such tunes as “Seize the Day,” “Watch What Happens,” “King of New York,” and “Something to Believe In.”

The showing will be followed by a talk-back with Artistic Director Curt Dale Clark, who will discuss how the film compares to the stage version. Film Fridays are free and open to the public. 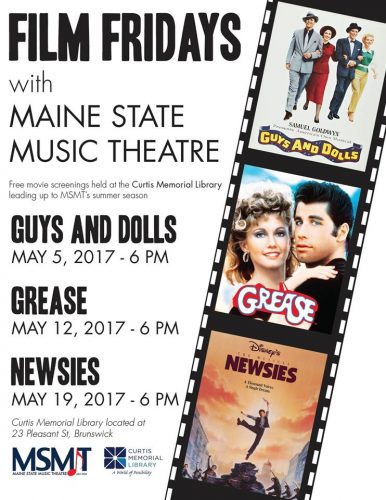