By Michael Gil Gilroy on September 25 in Art / Culture

At the age of 85, U.S. Supreme Court Justice Ruth Bader Ginsburg has developed a breathtaking legal legacy while becoming an unexpected pop culture icon. But without a definitive Ginsburg biography, the unique personal journey of this diminutive, quiet warrior’s rise to the nation’s highest court has been largely unknown, even to some of her biggest fans – until now. RBG is a revelatory documentary exploring Ginsburg ‘s exceptional life and career from Betsy West and Julie Cohen, and co-produced by Storyville Films and CNN Films.

*Film is priced to own and includes a nearly hour-long interview that film distributor Magnolia Pictures conducted via Zoom earlier this summer with Betsy West and Julie Cohen, the film’s directors. 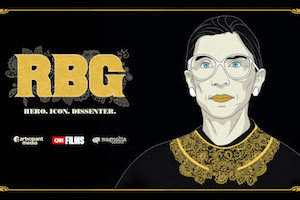 COVID-19 and Flu Season: Tips for Staying Healthy
Oliver Sacks: His Own Life