By Michael Gil Gilroy on May 4 in Art / Culture 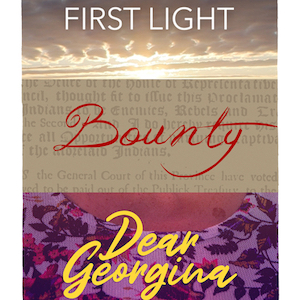 Bounty (9 mins) – We are citizens of the Penobscot Nation. For this film, we bring our families to Boston to read our ancestors’ death warrant. This abhorrent proclamation, made in 1755 by the colonial government, paid settlers handsomely to murder Penobscot people. It declared our people enemies and offered different prices for the scalps of children, women, and men. Bounty proclamations like this, some even paid in stolen land, persisted for more than two centuries across what is now the United States. The memory of being hunted is in our blood. We know this to be true, and the science now affirms that trauma can be passed down from generation to generation. In Bounty we take control of this process by inviting our children into the colonizer’s hall of injustice, to read their hateful words and tell the truth about what was done to our ancestors. We exercise our power by sharing the horrors of this hard history as an act of resistance, remembrance, and a step toward justice.

First Light (15 mins)  – For centuries, the United States government has taken Native American children away from their tribes, devastating parents and denying children their traditions, culture, and identity. First Light documents these practices from the 1800s to today and tells the story of an unprecedented experiment in truth-telling and healing for Wabanaki people and child welfare workers in Maine.

Dear Georgina (15 mins) – At age two Georgina Sappier-Richardson was removed from her home and Passamaquoddy community in downeast Maine by child protection services. She would never see her parents again. Terror and abuse followed over 16 years in four different foster homes. Dear Georgina follows this Passamaquoddy elder from Motahkomikuk as she tries to fill in the blurry outlines of her identity. Now a grandmother Georgina is still attempting to re-integrate herself into the community she barely knew. Dear Georgina is a follow-up to the Emmy® award-winning Dawnland (2018), in which Georgina told a portion of her harrowing story of surviving foster care. Georgina is just one of many thousands of Indigenous children with similar stories. She remembers, “When I was 30 years old and I went back to the reservation this Indian lady told me, ‘You look exactly like your mother as a young person.’ So that made me feel special, made me feel real.” This propels Georgina’s lifelong mission to find herself. Despite her gregarious personality and infectious laugh, Georgina still struggles with the trauma from her youth and finds herself stuck straddling two different worlds.  In the end, Georgina returns to her foster community in northern Maine, determined to reclaim some fragment of her lost childhood. She makes an incredible discovery, but will it help heal decades old wounds?