By Patti Spencer-Yost on August 2 in Food, Live Music

Join us for a special evening of music paired with local organic farm picnic dinner at the Merry Meeting Kitchen Greenhouse.

Here’s your chance to catch a rare, intimate performance by David Wax Museum’s founders, David Wax and Suz Slezak, as they raise money for their new Geobarn music studio. The band tours the world, but they got their start playing smaller rooms throughout New England.  For this special concert, the duo returns to their acoustic roots and will be playing songs from throughout the band’s 14-year-catalog, in addition to their newest quarantine record Euphoric Ouroboric.

Tickets need to be purchased in advance using this link: david-wax-museum.ticketleap.com/turtlerock. All ticket holders will be sent a link in the coming week to purchase a personal party platter featuring Turtle Rock Farm food offerings – order at www.eventbrite.com/e/david-wax-museum-party-platters Vegan and vegetarian options will be available.  Be sure to order food by morning of show. 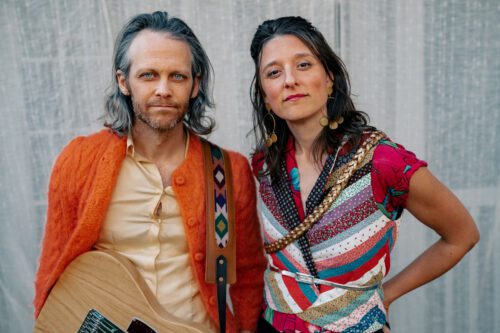 David Wax Museum is a folk and roots rock band blending traditional Mexican folk music with Americana in what critics have called Mexo-Americana. With NPR hailing them as “pure, irresistible joy” and raves everywhere from SPIN and Entertainment Weekly to the New York Times and The Guardian (which dubbed the music “global crossover at its best”) they’ve toured around the world and have earned invitations to support The Avett Brothers, Carolina Chocolate Drops, Buena Vista Social Club, Guster, Los Lobos, Josh Ritter, Gregory Alan Isakov, Watchhouse, and more.

Pre-pandemic, the ascendant band was enjoying a new level of success with a national TV debut on CBS This Morning, and three distinct features on NPR’s World Cafe. They built bridges performing at the wedding of Democratic presidential hopeful (now Transportation Secretary) Pete Buttigieg and his husband Chasten–and then in 2021 their plaintive ballad “Big Sur” debuted during the marriage scene on Netflix #1 show, Firefly Lane.