By Patti Spencer-Yost on September 19 in BDA EVENTS 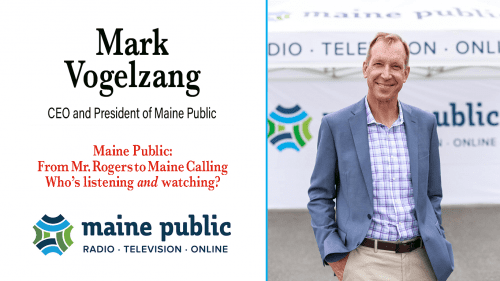 Location: Daggett Lounge, Bowdoin College
Time: Breakfast service will begin at 7:25 am.
Details: The event will start at 7:50 a.m. $20 per person, includes breakfast.

Mark Vogelzang has served as CEO and President of Maine Public since January 2012. He leads a staff of 100 employees at four locations, and reports to a statewide Board of Trustees with an annual operating budget of over $13 million. The independent, non-profit organization has 50,000 annual households and individual contributors, hundreds of business supporters, as well as annual appropriation from the State of Maine.

Maine Public operates 5 TV stations, 2 Statewide FM radio networks, with 7 Maine Public Classical stations which was launched in 2016 to compliment the 7 radio stations which provides core PBS and NPR news and programming to Maine, as well as portions of New Brunswick and Atlantic Canada. Maine Public has approximately 250,000 television viewers each week, (Nielson ratings), and is consistently ranked as one of the most listened to radio stations in Portland and Bangor.

Vogelzang’s strategic initiatives in Maine have included: a $30 million fundraising campaign for expansion of journalism, digital, and cultural content; launching a first-time television channel covering the State legislature; building a separate classical music network on radio and online; and a change in the bylaws to include new and additional community trustees.

He is an experienced leader in public broadcasting. As president of Vermont Public Radio (VPR) for 16 years, from 1993 to 2009, he helped the organization complete a $10 million endowment campaign and created two regional radio networks – one that carries news & information and another devoted to classical music. He was elected to NPR’s Board of Directors for seven years. (2001-2008), and served as the Executive Director of the NPR Foundation for most of 2009, overseeing the foundation’s entire fundraising operation. He was the station manager at WBFO-FM, Buffalo’s NPR member station, where he helped facilitate the acquisition in 2011 between WNED public television and the University at Buffalo in western New York.

Prior to leading VPR, Vogelzang worked as Program Director and Radio Manager at WHYY in Philadelphia, helping Terry Gross with the national launch of “Fresh Air” and assisting colleagues with national television productions, and led a major format change in Philadelphia public radio in the early 90’s.

Vogelzang received his BA degree from Dordt College in Iowa, where he also began his broadcasting career at the campus radio station. He and his late wife Rhonda have 5 adult children and a number of grandchildren.