By Tony Sprague on March 4 in Live Music

Join us on March 4th, for a festive evening of music with Grammy Award winner Arturo O’Farrill and the Afro Latin Jazz Orchestra. Tickets are required and available at bowdo.in/arturo

Sponsored by The Zuckert Fund

ARTURO O’FARRILL, pianist, composer, educator, and founder and Artistic Director of the nonprofit Afro Latin Jazz Alliance, was born in Mexico and grew up in New York City. His debut album with the Afro Latin Jazz Orchestra, Una Noche Inolvidable, earned a first GRAMMY Award nomination in 2006. His next album Song for Chico, earned a GRAMMY Award for Best Latin Jazz Album in 2009. The 2015 release of The Offense of the Drum was yet another Grammy Award winner. Arturo was, in addition, the winner of the Latin Jazz USA Outstanding Achievement Award, and a Cubadisco Award for The Offense of the Drum in 2015. Arturo’s well-reviewed and highly praised “Afro-Latin Jazz Suite” from CUBA: The Conversation Continues (Motéma) took the 2016 Grammy Award for Best Instrumental Composition as well as the 2016 Latin Grammy Award for Best Latin Jazz Recording. In addition, his composition “Three Revolutions” from the album Familia-Tribute to Chico and Bebo was the 2018 Grammy Award (his sixth) winner for Best Instrumental Composition. [credit: artist bio, Unlimited Myles] 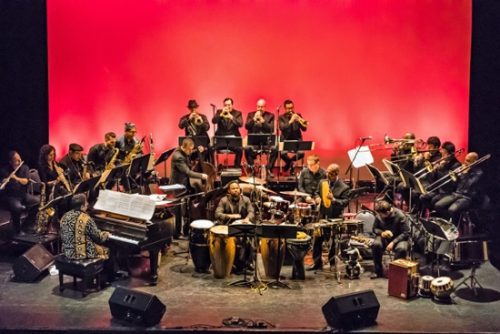